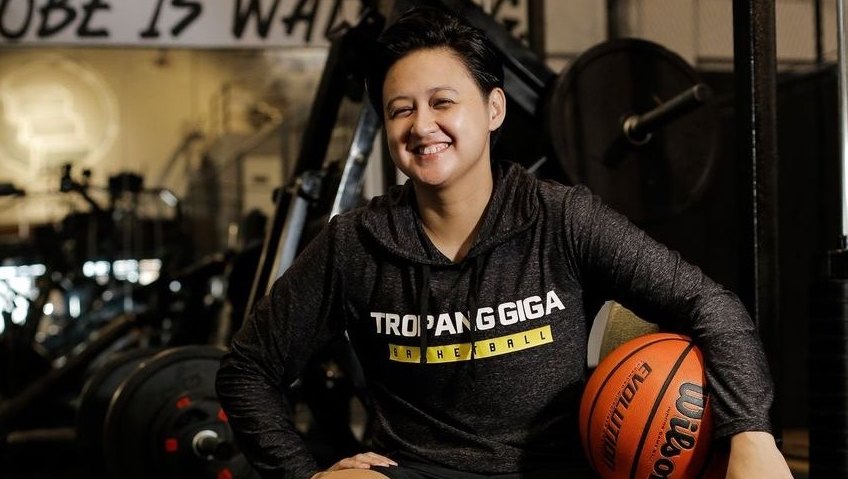 On the way to her very first practice with the TNT Tropang Giga, coach Mau Belen’s nerves got the better of her.

“I’ve never been in a situation na ganito kalaki… I saw the players shooting. You saw Jayson Castro. You saw Ryan Reyes. You saw Troy Rosario. At one moment, you get starstruck syempre, with those people you were just watching. You’re a fan of those players.”

Nowadays, Belen is relaxed and carefree. You would be too if you were in her position. She just won a championship with TNT in her first major coaching gig, also while being the first-ever female to be part of a coaching staff in the PBA. She handles video and statistics for the team. She will also be the head coach of TNT’s 3×3 team this November.

In a recent episode of SBP’s Women In Charge, she opened up about her inspiring journey into becoming a trailblazer in women’s basketball and a champion in the country’s premier league.

“I think more than anything else, mas na-savor namin ‘yung all the sacrifices, all the hard work that we did before that moment, before ‘yung championship na ‘yun,” she said on TNT’s title run. “Nakakaiyak, nakakataba ng puso. It’s not really the moment na nag champion kayo but it’s the moment in between from the beginning until those last moments of the championship.”

TNT’s return to Philippine Cup glory had its ups and downs. For Belen, the moments have been very unique. Her journey is vastly different because no one has ever done it before.

“Imagine, that’s 12 teams. If you have six coaches per team, that’s 72 coaches. So there are 71 guys and one girl on the coaching staff. That’s very scary,” Wala kang pwede tingnan or pagtanungan, ‘Paano ba to? Paano ba yan?’ Kasi there’s no one because you’re the first one.”

Fear, doubt, and nervousness enveloped her at the start of Belen’s first TNT practice. There she was at her first crack in the country’s biggest league, tasked to be part of the coaching staff of Chot Reyes, who was making his return to the sidelines. However, despite the nerves, her apprehensions were quickly put to rest.

“It gave me confidence na okay, these people, they got me for a reason. From then on, I just [kept] on learning, watching them, watching how they coach, waiting for them to tell me anong dapat kong gawin or asking them ano pang extra na pwede kong gawin, helping each coach.”

Belen may have had doubts when she started her coaching career in TNT, but like she said, the team got her for a reason.

Falling in love with the game at an early age through her family, Belen’s basketball voyage included stops at Diliman Preparatory School, Centro Escolar University, and most notably, Assumption College, where she got the itch for coaching.

“After college, gusto ko maghanap ng malalaruan,” she said. “But then again, sabi ko why not coaching?”

Belen’s passion for basketball and teaching took her overseas to Dubai. From 2014 to 2017, she worked as a sports events manager while also becoming the first female coach in the Filipino Youth Basketball in the UAE. At that point, she merely wanted to dip her toes into coaching. They say the best teacher is experience, and she knew she needed to get her reps.

“You really get to be good at coaching habang nagco-coach ka. That’s my mentality,” she said.

Belen went back to the Philippines to pursue her coaching career at home. She bet on herself and tried to move around the coaching circles in the country. She had stints with Assumption College, St. Paul Parañaque for Grade School and High School boys, and Philippine National Police.

As she gained more experience from coaching, she came at a crossroads in her career. She wanted the women’s team in the PNP to train year-round, similar to their male counterparts. After management shut down that idea, the uphill climb towards equality became more apparent.

By early 2020, Belen wanted to fly back to Dubai, thinking there were better opportunities there. But then the pandemic hit, putting her plans to a screeching halt. She then immersed herself in coaching seminars and talks online, hoping to stay in touch with the game in any way possible.

It was in August that same year when Belen took a leap of faith. Coach Chot Reyes opened a coaching seminar for provincial coaches and she immediately knew she had to get in.

Belen responded to coach Chot’s post about the seminar by writing a lengthy and heartfelt message, explaining her passion for coaching.

Fortunately, Belen was able to enter the program as one of the 16 lucky participants.

After the series of seminars, Reyes kept in touch with all the attendees. Belen was still jobless and waiting for an opportunity. Back in March, she was about to make her return to Dubai, but once again, fate intervened.

Mere days before she was scheduled to fly out, during her despedida, she got a text from Reyes.

“He messaged me and said, ‘Can I call you? Tell me when you’re free.’ Syempre when Coach Chot says ‘can I call you’, yes of course!” she said. “He called and he asked that question, ‘What are you doing now?’ I didn’t say I was going to fly because I was interested in what he was about to say.”

Reyes said they had a position in TNT and asked Belen if she was willing to be part of it. Brushing the fact that she was about to hop on a plane in a week, she immediately said yes.

Fast forward months later, she’s now a champion coach under one of the most storied franchises in the PBA. There are still times when she feels scared, daunted, and pressured. Nonetheless, the weight on her back gets lifted every time she remembers that she’s not just doing this for herself, but for everyone else looking to break barriers.

“What I put in my head every time I feel scared is that I need to be at my best every time because there’s someone looking at me, dreaming also that they want to be a PBA coach someday,” she said, mentioning that if she doesn’t set the bar high, then it will have a negative impact to other girls wanting to be in her position.

Listening to Belen talk, you would know that she loves sharing words of encouragement. She also understands the value of asking to gain knowledge. Like a true coach, her motivational messages make you want to run through a wall for her. She implores constant learning, consistent working, and never giving up.

“I want to be great,” she passionately said. “I want to embody greatness – greatness in a sense na not just as a coach, but as a person.”

In her path to greatness, she lists three important steps. The first is to send girls to schools, giving them scholarships to play the game and receive education. The second is to give jobs to her fellow coaches, especially women’s coaches. She hopes that the girls whom she plans to send to schools would become athletes, and in turn, the schools would need coaches. It’s about creating a demand for women teams and women coaches by supplying girls who love to play basketball.

Finally, her last step to achieving greatness is to uplift the quality of women’s basketball in the country.