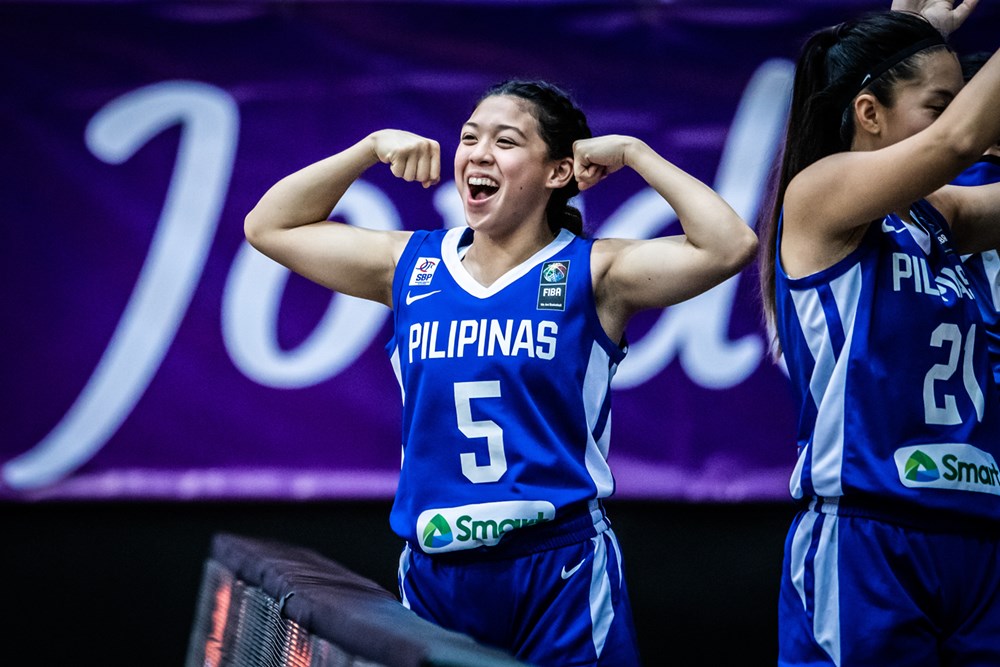 Gilas Pilipinas Women kept their Division A status after an inspiring 74-70 victory over India to cap off their 2021 FIBA Women’s Asia Cup campaign on Friday.

It was a hard-fought win that encapsulated the team’s journey to stay with Asia’s best basketball teams.

“We just played our hearts out. That’s what we’re all about. The goal of this team is to compete and compete and play the very best all the time,” Gilas Women head coach Patrick Aquino said.

With the victory, the Philippines finished the tournament with a 1-3 record, placing seventh overall. After gut-wrenching defeats to China, Australia, and Chinese Taipei, Gilas Women needed a win to avoid relegation to Division B. Fortunately, the team found their rhythm just in the nick of time and was able to outlast a gritty effort from India.

The Philippines has been competing in Division A since the 2017 FIBA Women’s Asia Cup after getting promoted in 2015. Gilas Women have avoided relegation twice—in 2017 and 2019, winning against North Korea and India, respectively. Consistently staying in the top tier of Asian basketball, despite the blowouts, is still a sign of progress.

“We’ve been here for the last three editions of the FIBA Asia Cup. I think it’s just the pandemic that cut the program,” Aquino said about the direction of the team. “I mean the program is growing and growing and hopefully sponsors would come in and help us grow more. I think with that we’ll be more competitive in the coming tournaments.”

Gilas Women, who haven’t played since the 2019 Southeast Asian Games, trained roughly for just two weeks before flying out to Jordan. Signs of rust, absence of conditioning, as well as the lack of playing competitive basketball got the better of Gilas especially in the first two games of the tournament. The team also had to integrate a new set of teammates as eight veterans were infused with four rookies.

Another difficult challenge was the huge height advantage among Gilas’ opponents. With only one true center, the team had to rebound and defend as a unit against taller foes. It also didn’t help that national team mainstay Jack Animam was unable to compete in this edition of the Asia Cup because of her commitment to her new professional team in Serbia.

The 2021 Gilas Women squad had to endure a lot of changes amid very difficult circumstances but still managed to win when it mattered most.

“I’m really so happy about just being here and competing with the girls even though with all those bubble training and coming here,” Aquino said. “I’m just so proud of the girls and hopefully we can do it every time there’s this kind of tournament.”

“For me, it was a hard time going here because of the bubble but we’re very happy for this performance because of all of my teammates’ hard work,” team captain Janine Pontejos said.

Gilas Pilipinas Women also had to thank the amount of support thrown their way. In all of the games in Jordan, there was always a throng of people cheering and egging the team. Filipino fans back home were also abuzz watching Gilas Women play after such a long wait.

“There’s a big factor of the audience because they boost our energy to win this game,” Pontejos said.

“Everywhere we go there are a lot of Filipinos around the world and fans come out and support us. That’s one thing that for sure Filipinos really support — our athletes and our journey here. And without them, we won’t be as lucky as today,” said Aquino. “We’re so happy and we’re so thankful to everyone who has supported us in this tournament.”

After two long years, Gilas Pilipinas Women were back in action for the FIBA Women’s Asia Cup. And although the team suffered tough losses, they were still able to show that the Philippines is still one of the top Asian countries in women’s basketball.