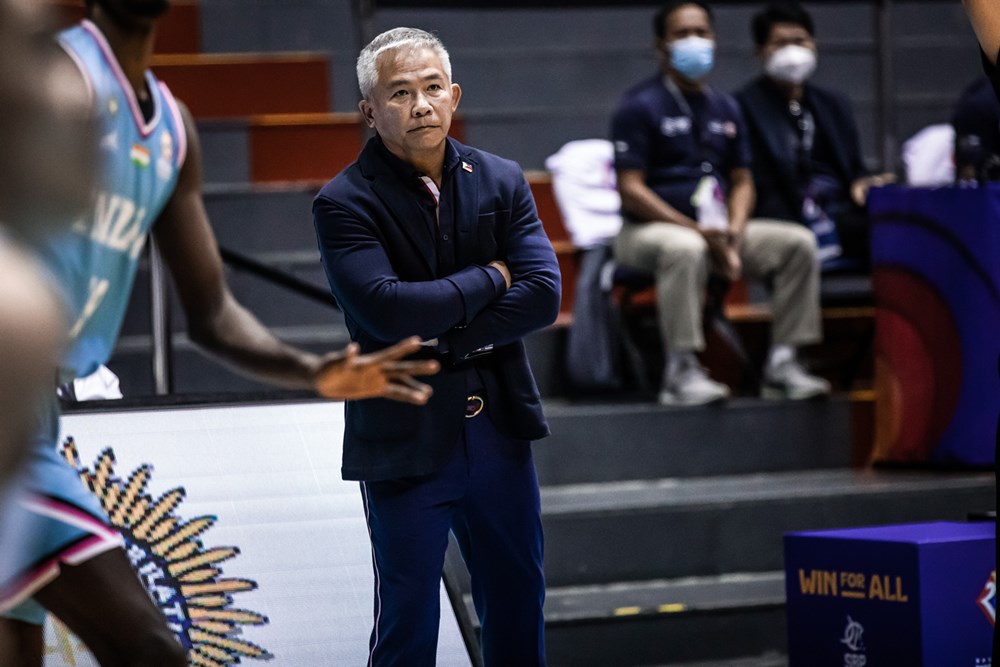 For Gilas Pilipinas Men head coach Chot Reyes, it’s all about gearing up for the future.

After the February window of 2023 FIBA World Cup Asian Qualifiers, the rest of the year will feature more tournaments and challenges for the national team. At the forefront of those preparations is putting up a cohesive pool of players that will encompass a long-term program for the World Cup and beyond.

Among the cornerstones that Reyes will be looking into is a pair of young standouts in LeBron Lopez and Caelum Harris.

“It has to be vertically integrated and that means we have to include18-and-under, 16-and-under, as young as we can get,” Reyes said of Gilas’ plans of putting together a program. “And that’s why we got LeBron to start joining this team, a prime candidate for the SEA Games lineup, hopefully, he can develop to be ready at that time together with Caelum Harris. And we’re looking at those two guys at the forefront of our 18-and-under program.”

Lopez, 18, was an up-and-coming high school star from Ateneo who turned pro with Overtime Elite in the United States last year. Lopez debuted for Gilas in the 2021 FIBA Asia Cup Qualifiers and was placed in the pool for the recent World Cup Qualifier window. Harris, meanwhile, is a 16-year-old Filipino-American from Nashville, Tennessee who is expected to see action this year.

“We are already looking that far and we’re putting a pipeline together now because that’s the only way we can really be sustainably competitive,” Reyes said. “With everything that’s going we really know the hodgepodge of little preparation time… really doesn’t work.

Part of Reyes’ long-term plan is the integration of Thirdy Ravena and Dwight Ramos as the leaders of the national team.

“In fact, I’ve already gone on record by saying we are really transferring the mantle of leadership on their shoulders,” Reyes said of the two stars. “So this early pa lang, I’m already looking at them as leaders not just as players. They’re already being trained and developed as leaders. As you very well know, if you’re a leader there are other things that you have to think about aside from your own game.”

Against India and New Zealand in World Cup Qualifiers two weeks ago, Ravena and Ramos starred for Gilas. The two versatile forwards were critical for the team especially on the offensive end where they carried much of the scoring and playmaking load.

“I told both Thirdy and Dwight they should get used to it from now, not next year, not a few months from now, but now,” Reyes went on. “They should really start looking at this team as a team of which they are the leaders. It’s going to be a heavy load on their shoulders so as early as possible for them to get used to it, I think it will benefit both of them and the program.”

On the horizon for Gilas Pilipinas Men is the Southeast Asian Games in Hanoi, Vietnam. The tournament is set for May 13, but Reyes shared that they already need to come up with a roster as early as next week.

Reyes said that forming a long-term team that exuberates smooth-flowing basketball is easier said than done. Minimal training time has long been the Achilles’ heel of Gilas and the coach is optimistic that it will eventually be a problem of yesteryear. Not looking for excuses, Reyes pleaded not for sympathy from fans because of the tight schedule and players’ availability, but understanding and to focus on what lies ahead.

“We’re preparing for the long term and that prize, big picture, is the FIBA World Cup in August 2023,” Reyes said. “Yun ang pinupuntirya natin. Judge the system, judge the style of play when we play. I’m pretty sure it’s going to be far different from what you saw [in the February] window.”