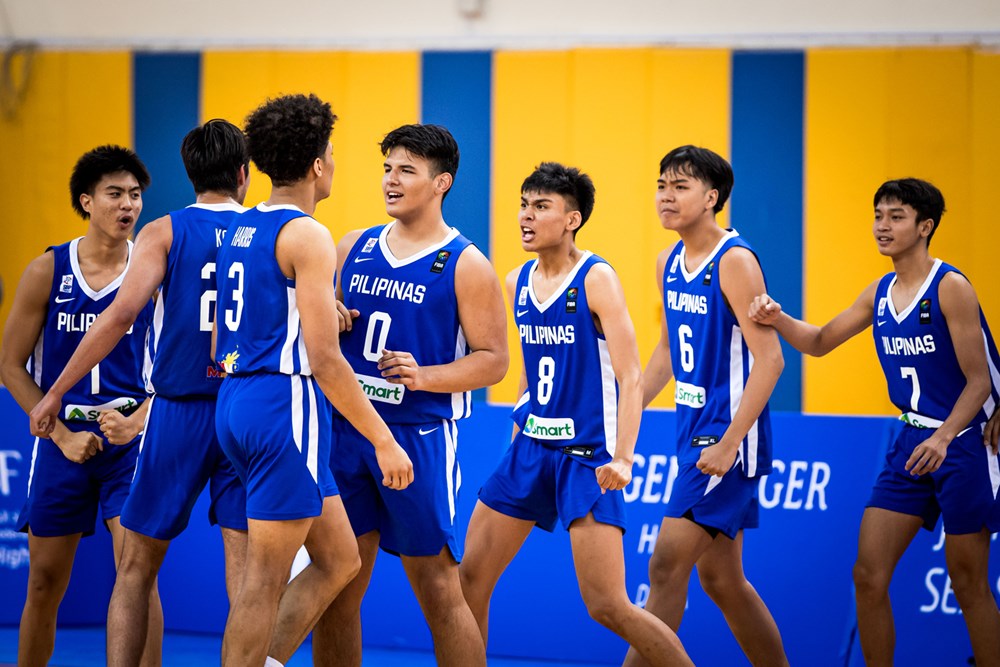 The newest iteration of the youth national team finished in seventh place in the regional tournament after winning their final game against Iran. Though they fell short of earning a ticket for the U17 World Cup, it was nonetheless a strong display for the program considering it went in full rebuild mode.

Here are a few highlights of their impressive campaign:

Talent on the rise

Caelum Harris lived up to the hype as an athletic versatile forward. After scoring just two points in his Gilas debut, he ended up as one of the team’s top scorers. He averaged 10.3 points, 6.0 rebounds, 2.7 assists, and 1.0 steals in six games, doing a little bit of everything on both ends. Not to mention, he had a handful of eye-popping dunks that made you jump out of your seat. The upside is extremely high for the 6-foot-5 swingman. He can get to the rim when he pleases, all while being able to stay with his man and disrupt shots.

The smallest player for Gilas, Jared Bahay, also turned heads with his fearless play. The 5-foot-9 guard put up 13.2 points, 5.0 rebounds, 4.8 assists, and 1.8 steals. He had his best scoring game of 25 points when the Philippines faced Korea. Bahay’s knack of penetrating defenses and finding spots to either score or pass to an open teammate was crucial in Gilas’ offense.

Big man Zain Mahmood was also a consistent force in the paint. Gilas came into the tournament with one of the shortest rosters but Mahmood set the tone with his imposing play. He battled against larger opponents and still wound up with 11.3 points on 61.2 percent shooting as well as 5.8 rebounds.

Learning on the fly

No player from Gilas’ roster had prior international experience and their growth and maturity were on full display as the tournament wore on. From the first game against Kuwait until their last versus Iran, the next faces of Philippine basketball adapted how to play alongside Asia’s best.

Whether it was learning how to attack trapping schemes or zone defenses, adjusting against taller opponents, or tightening their rotations versus the top teams, the young team quickly evolved.

For instance, it’s no coincidence that Alexander Konov and Lorenzo Competente eventually found their stroke late in the tourney. Bahay understood where his shooters were and knew how to penetrate and dish at the right time. Konov and Competente’s spacing and movement were also critical in spreading the offense. They gained enough confidence that by the time Gilas faced Australia, Korea, and Iran, they were hitting their shots.

As a team, the youth team was able to rely on their defense in tight situations. They averaged 9.2 steals as a unit, morphing into a disruptive force to bother opponents. With the lack of height, they used their speed as an advantage.

Though it is cliche to say that the future is bright for every young group of individuals that represent the country, the next generation of stars are definitely ready for their place in Philippine basketball.

Taking into account that the program had to start from scratch in scouting, recruiting, and training for the FIBA U16 tournament, Gilas Youth still managed to enter the quarterfinals. They were able to put the scare on eventual champions Australia albeit it was already for one half. After the disappointing loss to Korea, they bounced back in a big way by pulling away against Iran.

The next step for Gilas Youth is to continue to improve and learn. There is a lot of promise for these young players and now they have an international competition under their belt. These young players are ready to carve their own path and take their place in Gilas lore.