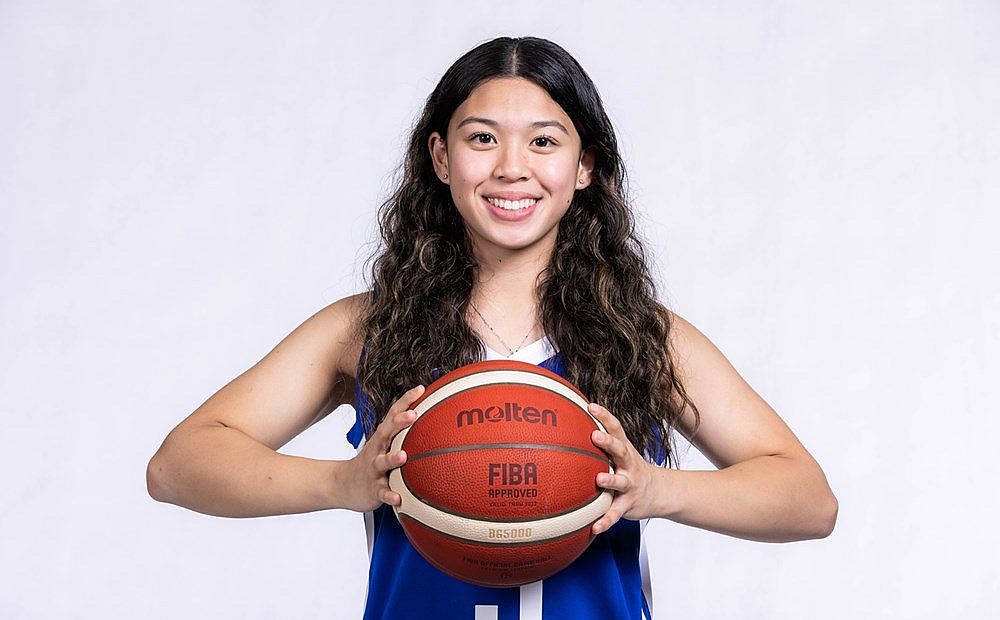 The newest Women in Basketball ambassador for the Samahang Basketbol ng Pilipinas (SBP) has always had the number one quality to become a member of the Philippine national team: heart.

Even at an early age, Ella Fajardo had an inner drive and uncontainable energy that set her apart.

“My dad said that he saw something in me and that was kinda just heart,” Fajardo, who started playing basketball at the age of nine, said in a recent episode of SBP’s Women in Charge. “Even though I wasn’t the best scorer, the best dribbler, I dive for the ball, I play defense, if I did score I was jumping up and down.”

Fajardo was named the country’s newest representative of women’s basketball alongside Jack Animam in a recent episode of SBP’s Women in Charge. She may be a 19-year-old and still in her first year in Fairleigh Dickinson University, but her love for the game and for the country makes her an ideal person to be a role model for future generations of Pinay athletes.

“Thank you for everybody congratulating me,” she said when host and former Gilas Pilipinas Women Bea Daez-Fabros made the reveal. “Thank you to SBP for giving me such an amazing role for these women, for these men, for the youth, girls and guys.”

Fajardo’s passion for hoops was ingrained in her by her father by always taking her to a basketball court to play. It was also through her father that she got introduced to the Milo Best Sports Clinic whenever she and her family visited the Philippines during the summer. It wasn’t just a typical summer camp for the young Ella, however, as she treated her yearly visits as a sort of basketball pilgrimage, honing her skills on the court. She used to wake at 7:00 AM on weekends and stay until 3:00 PM, doing both the morning and afternoon sessions of the program.

“When I got back to the United States, I got so much better,” she shared, mentioning that even her coaches noticed her development. “I’m very fundamental and I owe it all to the Milo Best Center.”

It was also through Milo Best that she got introduced to current Gilas Women assistant coach Julie Amos. One thing led to another and she finally got an invite to try out for the national team when she was 16.

Fajardo always dreamed of being on the Gilas Women team after the idea was introduced to her by her father.

“When I was I think 12 or 13, I watched that first (Gilas) workout,” she recalled. “My dad kinda explained to me ‘This is the national team. If you really work hard, if you really want it, you can be able to have the word Pilipinas on your chest. You can have that flag on your chest.’

“That was something I was like ‘whoa.’ That’s more than just playing for a high school team or a college team or a club team. Obviously those are all great but playing for your own country? That seemed really, really cool to me.”

Fajardo got her first chance to represent the country when she suited up in 2019 for the FIBA 3×3 U18 World Cup where the Philippines had a quarterfinals finish as well as the 3×3 U18 Asia Cup where the country earned bronze. Two years later, Fajardo found herself in the Gilas Pilipinas Women roster as part of the 2021 FIBA Women’s Asia Cup squad that allowed the Philippines to stay in Division A.

“It’s really no joke to be playing on the 5-on-5 team,” she said. “You’re literally chosen as some of the best or the best players of the Philippine team on the women’s side. I knew that it was a really big deal. You’re representing more than yourself, you’re representing your country. So you really want to prepare and give your whole heart. It’s a once in a lifetime experience.”

When Fajardo talked about her first go-around with the national team, she was like a kid living the dream. After admiring the women that wore the Pilipinas jerseys, there she was wearing one herself.

“In general I’d say that it was one of the best experiences of my life. I was sitting next to ates that I’ve been watching my whole life,” she said, also sharing that although she felt she was somewhat equal with her idols, she still looks up to them.

“When we were there competing, I just told myself to put everything on the court. No matter how many minutes, no matter how many possessions, really just to give my all because you could see everybody else, all my ates they’re giving their all.”

The rookie showed flashes of potential in her first stint in a 5-on-5 setting and her game will continue to develop. Currently, Fajardo is undergoing a redshirt year in Farleigh Dickinson. When she returned from the Women’s Asia Cup, she had already missed a month of school and practice. At that point it was already preseason and they were already scrimmaging with other teams so the school offered her to skip a year without using any year of eligibility. She is now using the time to learn the plays by heart and focus on her schoolwork. Next year will officially be her rookie season.

The next step for her is hopefully being able to join Gilas for the upcoming Southeast Asian Games and defend the country’s gold medal.

“Fingers-crossed for (the) SEA Games,” she said. “I really pray that I can play at the SEA Games because we have a lot to prove. We have a medal to win again.”

The newly appointed ambassador for women’s basketball has always advocated for the country and for sports. She even has her own YouTube channel where she proudly vlogs about her heritage and experiences while playing for the Philippines.  She believes that she has a platform that can push the conversation more towards women players.

“I think it just goes back to encouraging more Filipina athletes to keep pursuing their sport dreams,” she said. “Right now, obviously I’m trying to advocate for women’s basketball but softball, soccer, whatever it is, we’re all together especially since we’re trying to really incline—I guess—that support, that exposure. We’re all in it together.”